The Horn Blower Award was established in memory of our friend and long-time RSYC member Dick von Roth. Dick left us way too early. The award is not given annually, but only when the nominating committee identifies a truly deserving individual. It is awarded to those who best embody many of the attributes we remember in Dick. These include a passion for adventure, a generosity of spirit and a willingness to share knowledge with others.

Why “Horn Blower”? Like many couples, Dick and Mary split responsibilities on their boat. Dick was the captain. He ran the boat. He made all the decisions on maintenance and navigation, and whether on the lake or in the Bahamas he was always at the helm. Mary handled provisioning, cooking, shore logistics, entertaining friends, and lines and fenders for docking. When Dick passed away, Mary was faced with a huge decision. Sell, or learn how to captain the 53-foot trawler Isis. Mary opted for the later. The following year she brought Isis to the lake from the Chesapeake and she did it all. She handled the maintenance and dealt with the yard guys in Maryland. She gathered crew, set the watch schedule, charted the course and called all the shots on the trip up. Any time the boat approached a dock, it was Mary at the helm. Not only was it a huge accomplishment, it was emotionally very brave. When Isis reached Lake Champlain, she spent the first night anchored off Cole Island. I should mention that Mary handled the anchoring as well. Once we were safely settled in, the crew was treated to a celebratory toast on the foredeck. And that’s when it happened. With no one in the pilot house or anywhere near the helm stations, Isis’s huge horns went off. We could never find a reason, other than the one that was immediately obvious to all present. Dick was telling Mary, “Job well done, Captain.”

Mary Castner was the first recipient of the Horn Blower award. Mindy Donnelly was the second. 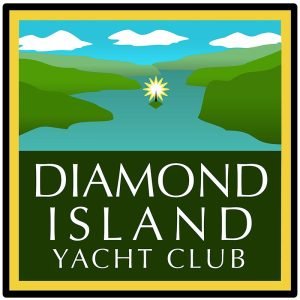